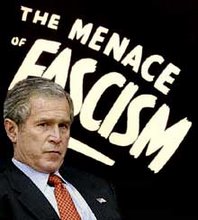 At least That's what Henry Kissinger said while he was working for Nixon in that other war, based on lies and false threats. That would be the very same Henry Kissinger who is advising Dick Cheney now and who cannot put foot in several nations around the world because he would be arrested on the spot as a war criminal.

Kissinger no friend of soldiers

On the same day that Gov. Sarah Palin used a quote from Henry Kissinger to buttress efforts to update Alaska’s oil tax, her only son joined the U.S. Army. With the promise of a $20,000 signing bonus in his pocket, Track Palin, an 18-year-old high school graduate and hockey player, will soon report to Fort Benning, Ga., to begin basic training.

Using Kissinger’s take on crisis avoidance in the governor’s call for legislative team work is a curious choice. Especially given Kissinger’s contempt for American soldiers. In a 1973 White House conversation between Kissinger, the national security adviser, and Al Haig, then Nixon’s chief of staff, Kissinger said military men are “dumb, stupid animals to be used” as pawns for foreign policy.

The quote is found in “Final Days,” a book by Bob Woodward and Carl Bernstein. Kissinger has never disputed it.

In Nixon’s time, the draft fulfilled recruiting quotas for the Vietnam War. There was no problem pulling young men off the street, giving them 10 weeks training, then shipping them directly to the quagmire. In that threat fabrication, America lost more than 58,000 men and women. Their names are etched on The Wall in Washington, D.C. I wonder if Track Palin has walked its stone corridor.

Many boys Track’s age feel invincible and eager to be tested in a challenge larger than themselves. Brain maturation is still incomplete; they want to be recognized; they want to be heroes. They are impulsive and easily persuaded by recruiting ads featuring images of gung-ho action and adventure. Of course, the $20-grand incentive makes a lie of the all-volunteer Army; these kids have become paid guns for the oil cartel.

If he is anything like the Marines I trained with more than 30 years ago, Track Palin cannot fathom what awaits him. He’s bought into a web of lies foisted on his generation by men with hearts as cold as The Wall’s granite. Bush, Cheney and most of the neocons leading today’s waste and carnage avoided combat in Vietnam and show little regret when other people’s children are maimed and destroyed.

As one of Nixon’s closest advisers, and later as secretary of state, Kissinger ran foreign policy as a personal fiefdom. Bypassing Congress and sometimes Nixon himself, Kissinger used his power to spy on Americans and members of Congress, plotted military coups in Chile and Argentina, supported torture states, threatened to use nuclear weapons and bombed civilian populations in Laos and Cambodia. At the apex of his control over the destiny of millions, the media spun him as a sex symbol, gaining the nickname “French Kissinger.” He is quoted as saying, “Power is the ultimate aphrodisiac.”

But the old Nazi sympathizer (he helped Nazi officers escape to America during Operation Paperclip) has not gotten away scot-free. In Chile, Argentina and France, he’s considered a war criminal and wanted for questioning. He cannot travel to Britain and Brazil because immunity from arrest cannot be guaranteed.

Bush asked Kissinger, now a private consultant and powerful force in Washington, to lead the 9/11 Commission but failed to vet him for conflicts of interest. During a private meeting with the 9/11 Family Steering Committee in 2002, Kissinger faced questions about his client list. He refused to say whether he worked for Saudi clients or anyone named bin Laden.

The next day he withdrew his name without public explanation.

Today, Kissinger remains a presidential adviser, helping Bush and Cheney devise Iraq strategy. However, his counsel to Bush appears at odds with what he told the BBC last November: “If you mean by ‘military victory’ an Iraqi government that can be established and whose writ runs across the whole country, that gets the civil war under control … in a time period that the political processes of the democracies will support, I don’t believe that is possible.”

Perhaps this is why Sen. Ted Stevens tells Alaskans that this war is long and slow and that we need more patience and greater sacrifice. Someone needs to tell the senator that the Iraq war has gone on longer than World War II, the one he served in.

When the governor’s son enlisted, I can assure you the recruiter did not inform him of these statistics and much more.

Douglas Yates is a writer who lives in Ester and served in the Marine Corps.

(In accordance with Title 17 U.S.C. Section 107, this material is distributed without profit to those who have expressed a prior interest in receiving the included information for research and educational purposes. I.U. has no affiliation whatsoever with the originator of this article nor is I.U endorsed or sponsored by the originator.